The buzz surrounding the revolution of Near Field Communications or NFC as it is more commonly known  is finally getting underway. After over a year of NFC chips being available in several different models of Android devices, major third-party developers are finally starting to incorporate the technology into their apps. Scanning tags is fun and all, but using NFC to share information in popular apps between devices is where NFC really shines. An update to the Foursquare app allows you to do just that. 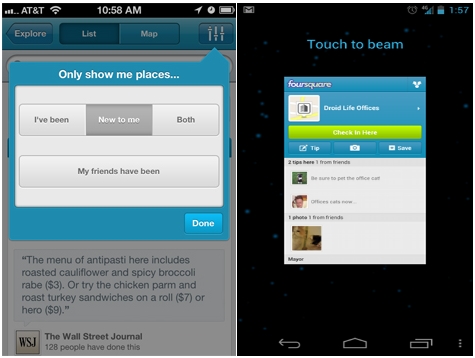 By using Android Beam, Google’s catch phrase for peer-to-peer NFC communications, Foursquare users can now bump phones and transfer information like lists and places visited, along with initiating friend requests and checking in wherever NFC tags have been made available. Venues can now use NFC enabled tags, posters or other similar media that when tapped with an NFC equipped device running Android 4.0, will automatically prompt users to check in. Unfortunately, the functionality is currently limited to phones that have both an NFC chip built in and run Ice Cream Sandwich (Android 4.0). At this point, that means the Galaxy Nexus is pretty much your only option. The only question remaining is why would Foursquare bother to push out an update that impacts such a small niche of the current Android user base ? Well for the time being, Galaxy Nexus owners would want to brag about their devices (being one of the very few devices currently having ICS) while the rest of us would have to wait for our respective NFC enabled Android devices to get an offcial ICS update. The Foursquare app with NFC support can be downloaded form here

ESPNCricinfo App For Android- A must for Cricket Followers

Another Siri Killer on its way – LG Quick Voice