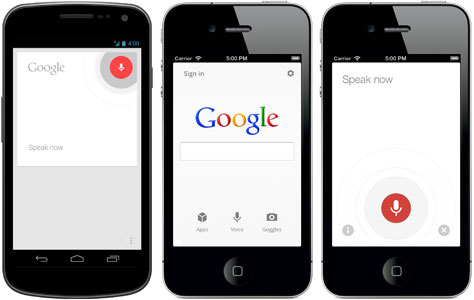 Voice powered search applications have been talked about on a number of different occasions whether its Apple’s very own Siri or the new Google Now for Android. Both have been much appreciated for multiple reasons and have started to gather a large fan base. Now the question which needs to be raised here is whether Google’s new and much improved Google Now like Voice Search client for the iOS be a bad move for Android ?

Since the launch of  Android 4.1 JellyBean, people have started relishing the one distinguished and exclusive feature which is Google Now which promises to offer accurate search results through the new “Knowledge Graph” technology used by Google exclusively for Android devices but now with Apple coming into the frame its going to be an entirely different scenario. To be very honest, Google first and foremost has been a search engine since its very existence and it has no issues in expanding its resources with other companies irrespective of the fact that iOS is Android’s biggest rival to-date.

Google claims that the patent wars taking place these days between Samsung and Apple have nothing to do with what Google does or does not do. As we all know, Android has always been an open source OS which means anybody has the right to taste its essence and with that said, Google is now willing to bring its Google Now like voice client for the iOS. Tech pundits think its a bad move on Google’s end which might have major repercussions going forward. In a way they are right. The reason why people prefer Android over any other OS is its ability to adapt and overcome anything thrown at it by the other OS’s.

Still you have to wonder, with enough access to Google apps and services, is Google making a bad move by including iOS users on some of Android’s biggest perks? What’s next? A full Google Now application for the iPhone? I mean, what motivation would iPhone users have to make a switch over to Android ? It’s interesting when you consider the moves made by Google to a company like Apple, who has been known to play dirty and rules their App Store with an iron fist. It would be a cold day in hell before you saw Siri or Safari Mobile in the Google Play Store.

What do you guys think about Google’s projected move ? Is it a one way path to destruction or like many previous occasions will Google be able to out smart us this time around as well ? Only time will tell.

Snapchat 2.0 – Video, Audio, GIFs and so much more

Get ready For Amazing Alex – Rovio’s next