Bad news for Google Wallet users owning a Verizon Galaxy Nexus. Apparently Google Wallet is no longer supported (the carrier never officially allowed the app mostly used for making payments via NFC in the first place) even on rooted devices. Users who tried to access the app got a message saying  that the current version is no longer supported and needs to be updated and since the carrier doesn’t officially allow it, it cannot be updated from the Play Store as well. 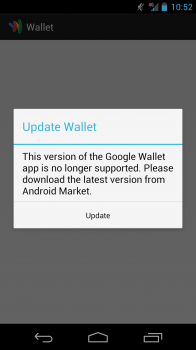 Sprint is the only carrier which currently allows access to Google Wallet and even though users on other network carriers were able to be use it on their rooted devices up until now do not have access to it anymore. Lets see if our developer friends at XDA can come up with a desirable solution soon.

Android games on the go with GameKlip