The Galaxy Note 2 is not just an elongated version of the Galaxy S3 as many people  have mentioned, instead it holds its own special place in the phablet category (combination of both a phone and a tablet). Since its launch last month, the device has seemed to attract quite a few delighted customers with its large 5.5″ Super AMOLED display, a Quad-core 1.6 GHz Cortex-A9 processor along with a very powerful Mali-400MP GPU and besides the hardware, it also offers a multi-window feature which enables you to simultaneously use two apps at the same time.

Besides the regular hardware and software, a device is also recognized with the type of accessories it has to offer and with that said, the Galaxy Note 2 supports wireless charging (wireless dock and pad sold separately) and now Samsung have announced another amazing accessory which is sure to leave everyone quite amazed. The South Korean mobile manufacturer has posted details about a new docking device for the Galaxy Note 2 simply called “Smart Dock,” this seemingly-normal desktop dock actually turns your Galaxy Note 2 into a mini desktop computer. 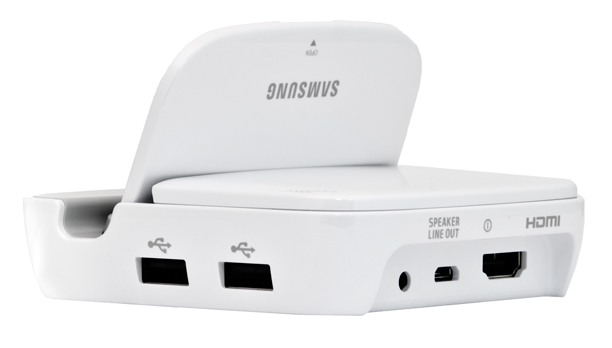 This little dock features a full-sized HDMI port to hook up to a monitor, as well as a 3.5mm line-in port for an external speaker in case the monitor doesn’t have audio support built in. Along the sides are three full-sized USB ports for adding peripherals like a keyboard and mouse, and a micro USB port on the back for charging. Whether the USB cables can be used to transfer data to and from other computers and devices, has yet to be seen. At the dock’s rear, you will find a back brace that also acts as a protective cover for the connection cradle when the device is not in use and it has been made in such a way that its wide enough to even add an additional Flip Cover for an overall protection of the device from dust and dirt.

The dock is currently available for purchase from Samsung’s website and is priced at just $99.99 which is relatively quite a nominal figure as compared to other traditional docking systems which carry a heavy price tag to their name. Samsung have yet again lived up to our expectations with the launch of this useful accessory for the Galaxy Note 2. I for one would definitely like to add it to my Christmas shopping list. Would you ?

How to get Jelly Bean 4.2 Clock, Keyboard and Camera with PhotoSphere on your Rooted Android device