Home > Google Play Store > Gmail App for Android gets Updates, Are they Prepping for Android 4.4 KiKat?

Google has been on its toes rolling out updates one after the other for its apps such as YouTube and Hangouts. Though they are minor updates, but still good to know Google cares to keep on updating its apps. The latest app to get the new update is Android’s Gmail app, the app now has card type UI which makes for cleaner message viewing. 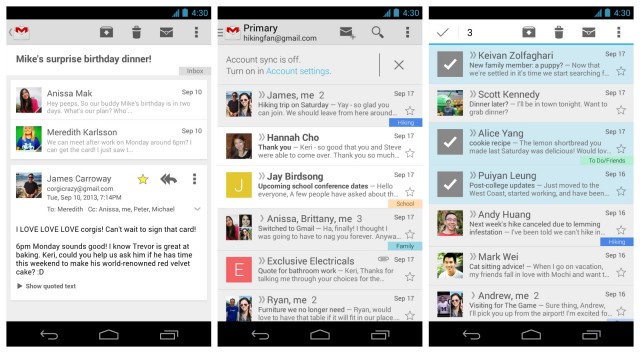 When you select multiple messages now a tick mark comes on each message plus a couple of new animations, of course they would be minor internal tweaks as well. People who are stingy about their device’s battery life and keep sync off, there is a new feature fro them too, a notification telling the user when sync is on or off in the app only. The update though is only for devices running  ICS and above  i.e. Android 4.0+. Perhaps these are signs that Google are working hard to prep their apps for the next Android 4.4 KitKat siad to be out in October next month.