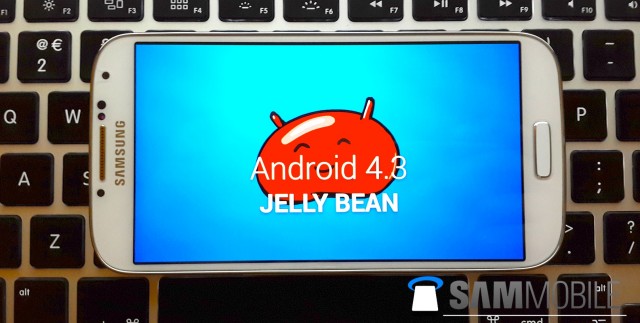 News for Android 4.3 for Samsung and HTC devices has been hovering around for quite some time. Earlier we gave you  the low down on Android 4.3 for the HTC One, now it seems to be the Samsung Galaxy S4’s turn. Thanks to our friends at SAMMOBILE we got our hands on the  Android 4.3 test firmware for the Galaxy S4 (GT-I9505). Samsung usually takes a while to release new versions of Android OS’s for its devices, as it has to update its Touch Wiz UX UI as well.

According to our previous sources October is the confirmed month for the S4 getting the Android 4.3 update, so getting the test firmware right now will ease the wait for some people.  The full details of the test build are mentioned below.

The update brings with a lot of stability improvements, making it more lag free (not saying Android 4.2.2 was lagging much).  Samsung Knox makes its debut with the test firmware and seems to be working without and hitch. It is basically Samsung’s security software for protecting your device. Samsung Wallet is also present in the update but right now you can not use it.  A new feature called Reading Mode which optimizes the screen for reading purposes but currently it works for some apps only. There are some UI improvements as well, but the main change we found which was a bit surprising as well that the update has improved the color reproduction of the display quite a bit, which makes the text even more sharper. (Which means the 1080p Full HD display just got better).

We DO NOT recommend you using the update on your device if you are not used to trying ROMS on your device. If you are interested then just click on the lick above to download the firmware. Do note though that this is just the test firmware and Samsung are still developing it so we may find more changes when it is full and final.