Google announced its annual Year End Zeitgeist, a look at 2013 through the collective eyes of the world on the web, offering a unique perspective on the year’s major events and hottest trends based on searches conducted in Pakistan. The event was held today in Lahore.

This year’s trending searches show growing interest in Sports, Bollywood movies, News, Elections and Turkish Dramas. On the other hand, the top people search indicates that Pakistanis follow a variety of local and international personalities where the top 3 people searched for were Paul Walker, Jiah Khan and Nelson Mandela.

Badar Khushnood, Google Pakistan Country Consultant says, “Google is predominantly the first place Pakistanis turn to follow their favorite sports, catch up on the latest news, find out about their favorite movie and stars or discover new things and people. The year-end Zeitgeist is a cultural barometer that gives us a real snapshot of the big events, online content preferences and growing trends in Pakistan for 2013.” 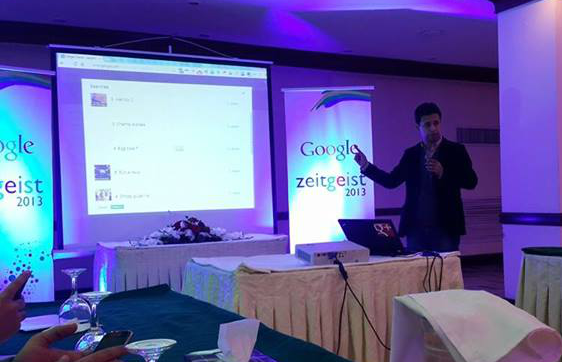 In people search, the latest international events and happenings dictated the top searched for people in Pakistan in the year 2013. The untimely death of the young actor of Fast & Furious acclaim, Paul Walker who lost his life in a tragic car accident became the most searched for personality. Followed by Jiah Khan, a Bollywood actress that committed suicide a few months ago and the death of the world renowned humanitarian, Nelson Mandela made him the third most searched for person on Google. Overall, the top 10 people search in Pakistan in 2013 reflects the fan following of both celebrities and politicians in Pakistan.

In addition to showcasing what people were curious about in Pakistan, Google Zeitgeist tools also offer insight into which topics captured the world’s attention in 2013. Top search terms from over fifty countries appear on Google Zeitgeist webpage, googlezeitgeist.com — from most-searched travel destinations in Brazil, to trending Australian celebrities, to most-searched Egyptian Olympians, to top tech gadgets in Japan and everything in between.

Google adds some holiday cheer to Assistant and Google Duo

QMobile launches its flagship device of 2016 on Daraz.pk – The Noir E8