Usually when Google is set to make any major announcement whether its related to a new Google product or any Google Android device for that matter, its usually done with a lot of pomp and show. That wasn’t the case this time around when the US based tech giants finally raised the curtains on the much awaited Nexus 6 smartphone running on Android 5.0 – Lollipop, Google’s latest entrant in its long running Android family. Since months we had been hearing rumors about the new Nexus device and what we might expect from it. Personally speaking I’ve been a huge Nexus fan myself. Not only because of the vanilla Android experience, a Nexus device has managed to reserve a special place in my heart.

Google’s latest member to enter into the Nexus family has been manufactured by Motorola and is by far one of the most powerful Nexus devices that we have ever laid our hands on. Trust me when I say this, the Nexus 6 is indeed a beast of a device !! The phablet sports a massive 5.96” 2560×1440 QHD AMOLED display (493 ppi) bundled together with a Qualcomm Snapdragon 805 SOC Quad core Krait 450 2.7GHz CPU, 32 and 64GB internal storage, 3GB RAM, NFC, an ambient light sensor, a powerful 3220 mAh battery with additional Qi wireless charging support catered together with a Turbo Charge feature that promises to run your new Nexus device for 6 hours on a 15 minute charge and 24 hours of use from a full charge. This new feature would definitely come in handy mainly because of the device’s massive screen size as well as the powerful specs. The one complaint that Android users had over the years was mostly related to smartphone batteries that used to run out within half a day of usage but with the Nexus 6, Google have promised to work on this nagging issue and hopefully it has now been fully resolved.

Moving forward with rest of the hardware, the Nexus 6 features a powerful 13MP rear shooter with optical image stabilization, f/2.0 aperture, a dual LED ring flash (similar to the one found in Motorola’s flagship device of the year, the Moto X) and 4K video capturing capabilities at 30fps.  On the front you will find a pretty decent 2MP camera perfect for selfies and video calling. Google have also taken into their stride to deliver the perfect audio output and in doing so, have equipped their latest flagship device with two quite powerful front facing speakers. The Nexus 6 would be made available in two color variants, Cloud White and Midnight Blue.

Coming towards the software side, the Nexus 6 is one of the first devices to run on Android 5.0 Lollipop, Google’s sweetest and fastest Android OS to date which not only offers performance enhancements and optimizations but is also the first version of Android to provide support for devices that would be made on the 64-bit architecture in the future (currently Google has it up and running on the recently announced Nexus 9 tablet which we would be talking about in detail in our next post). One of the major attractions of Android 5.0 is most certainly the beautiful looking Material Design which Google had been working on so religiously since the last few months featuring a host of new and exciting features that makes Lollipop one of the best Android experiences to-date. 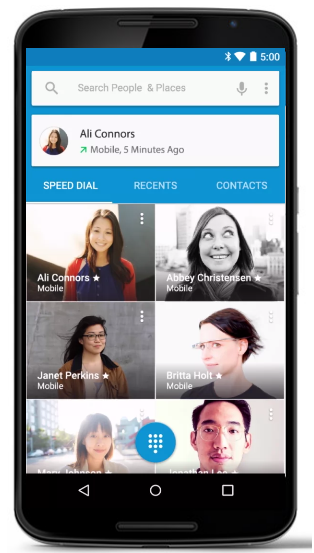 Google have promised to start rolling out their new devices by the end of this month having an off contract, stated retail price of $649 on the Google Play Store. A bit pricey for a Nexus device but with all the added juice, the price seems a bit justifiable nonetheless. The device would also be arriving on all major US cellular networks including T-Mobile, Verizon, At&t, U.S Cellular and Sprint after the 29th of October. So what do you guys think about Google’s new beast ? Does it have what it takes to stand toe-to-toe with the other existing big name phablet giants in the market? Do share your thoughts with us in the comments below. Cheers !!

Pakistani youth are resilient when it comes to cyberbullying, reveals Telenor survey