The Galaxy S6 and Galaxy S6 Edge are easily the most beautiful devices Samsung has created up to date. They have finally listened to the cries of the public and come with a device (or devices for that matter) which looks and feels like a premium device. The front and back of both devices is covered with glass i.e Gorilla Glass 4 (Pretty darn tough mind you ). The only concern for me is the smudges occurring at the back due to the glass other wise it is pretty solid.

The rest of the device is made from an aluminum uni-body, which according to Samsung is 50% stronger than the metal used in competing smart phones. The metal body has some kind of a reflective material on the front and the back which gives it a unique effect. This is more apparent on the Emerald Green and Topaz Blue versions. Other colors include Platinum Gold, Sapphire Black and Pearl White. The green and the blue colors are exclusive for the S6 Edge and S6 respectively. One thing we can always expect from Samsung is that their flagship devices always come up with impressive hardware. The Galaxy S6 and Galaxy S6 Edge do not disappoint in that front at all.  At the heart of the device lies Samsung’s very own 14-nanometer Exynos 7420 64-bit Octa Core processor (Quad-core 2.1GHz processor and a quad-core 1.5GHz processor). The chip-set is still to be put up against the industry leading Qualcomm Snapdragon 810 processor found in the HTC One M9 to see how it fares against the competition. Though Samsung have mentioned it consumes 30% less energy, which is always good for a better battery life. The S6 and S6 Edge have their RAM bumped up to 3GB LPDDR4 as compared to the 2GB DDR3 found in the Galaxy S5 as well.

Samsung have done away with a 16GB variant of their flagship device, Finally! The Samsung Galaxy S6 and S6 Edge will come in three storage sizes 32GB, 64GB and 128GB. This is Samsung’s way of dealing with the lack of a microSD card slot on their device. Samsung have also come up with a new technology for their storage chip, which means much fast data transfer speeds, similar to an SSD drive on a PC, which is quite impressive.

The Galaxy S6 and Galaxy S6 Edge both still have the same screen size as the Galaxy S5 which is 5.1inches as anything more would put them in the phablet category, which Samsung’s Note 4 already rules in. The display on the other hand is an entirely different story. Samsung have moved from the previous 1920×1080 Full HD resolution to an amazing 2560×1440 Quad HD Super AMOLED Display with a whopping 577 ppi, which  is clearly the best display found in the market to date.

The camera on both devices is 16MP at the back and 5MP at the front. This may not sound like much but, wait just a sec. Samsung have introduced an all new f/1.9 lens for the back and the front. This means that it is able to take in more light, which automatically improves low light photo shoots. The camera also has OIS (Optical Image Stabilization) and an auto Real-time HDR mode. So for all those (including me) who think flashes wash out images, this is a promising step forward by Samsung.

The Selfie camera or front camera is a 120 degrees wide angle lens, so for the increasing number of people in selfies these days, it will be able to manage group selfies just fine. Now for a fun fact, the home buttons of both the devices work as a quick launch camera shortcut. Pretty helpful practically speaking, and the time it takes for the camera app to open with the screen being off, is less than a second (0.7 seconds to be exact). So, you just need to double tap the home screen and voila, so you do not have to miss any of the moments you want to capture.

Both the devices come with Android 5.0.2 Lollipop out of the box, with the usual Touch Wiz on top. Now usually having Touch Wiz is a bad thing, according to some people as it adds a lot of bloat ware to the device, making users face the deadly and most annoying “LAG”. Now the previous Samsung devices excluding the Note line up did tend to slow down or lag at some point in time. Samsung seem to have learned their lesson and have trimmed down the unnecessary apps which come with Touch Wiz quite a bit around 40% which is huge. The S6 and S6 Edge will come with Milk Music, S Voice and S Health out of the box. If you want the rest then you can always get them from the Samsung’s Store. This is Samsung being in-tune with the minimalistic approach of Google via Lollipop.

Some people also said that using the Touch Wiz was a bit confusing due to the various number of icons all over the device. Samsung have corrected this by adding a simple yet sophisticated looking text based option interface. So even for older users, the learning curve will have cut down measurably. We will have to use the device ourselves for this to be proven though. Though this seems to be a plus sign as less apps meaning less internal memory being consumed by Touch Wiz and more for us to use. This is going to be really helpful now considering the fact that their is no longer a microSD card slot available.

Now Samsung is known to collaborate with various companies to provide gifts for their users of their new flagship devices. This time they have partnered with Microsoft, which means you will get all Microsoft apps available for download as well as 115GB of One Drive storage. Not only that, but you will also get the world renowned Fleksy app inbuilt as well.

Another noteworthy improvement over its predecessors is the way how Samsung have upped their game this time as far as mobile payments are concerned. Yes, even though the technology was existing since the last few years in the form of NFC payments, it never actually kick started the way it was initially planned out to be with less than 10% Americans making use of this so called newly found technology a couple of years back. With the introduction of Samsung Pay, things are about to change quite drastically to say the least.

The new payment service now enables users to not only make purchases using their NFC enabled devices, but it also enables your phone to act as your very own personal Master & Visa Debit/Credit card in an extremely unique but highly effective way. During their marquee event, Samsung announced their affiliation with some of the leading Financial Institutions of the world including the likes of Citi, Chase, Bank of America and American Express to name a few.

The Samsung Pay service can be availed by simply placing the phone next to a credit card swipe machine and the transaction would automatically take place in an instant. The company further added that this service is extremely safe to use and that the user’s credentials would neither be saved in the phone memory nor on any of Samsung’s online servers making credit card payments quite safe and reliable all the time. The new finger print scanner (embedded on the home button) further enhances and solidifies the notion regarding safe and secure transactions. 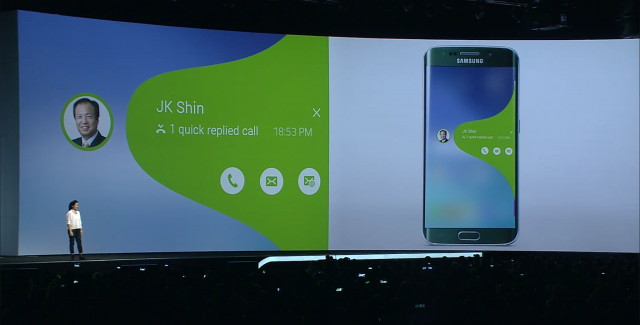 The Galaxy S6 Edge here shows us how it is different from its brother. It has a new feature which collects your 5 favorite contacts and gives them designated colors. Now when your device is lying down and you receive a notification or call from one of those contacts, the side of the screen will glow that color. So, even before picking up the phone you can tell whose calling you. Some people may argue that you could easily set different ring tones for various callers to find that out, but honestly how many of us keep our devices on ring and not on silent/vibrate most of the time? Also, you can use the heart rate sensor to send automated replies to the people who might call you during a meeting or anytime you may be busy. This is one of the features that we know of till now. I’m sure more will creep up soon as we get our hands on a testing device.

Now let’s come to the battery, due to the uni-body nature of the device, the battery is non removable. The Samsung Galaxy S6 and Galaxy S6 Edge come with 2550mAh and 2600mAh batteries respectively. This seems like a downgrade to the Galaxy S5’s 2800mAh battery. Now, even though these batteries may not look to be strong enough to last a day (Future testing for that is necessary). The amount of charging time they take is quite a remarkable feat achieved by Samsung. According to them both the devices take half the time to get from 0 to 100% than the current iPhone 6. Also only 10 minutes of charging will make the device last up to 4 hours for normal usage. Not only that, both the devices come with wireless charging capabilities built in them. They support both formats of wireless charging pads WPC and PMA (includes Qi as well). So, doesn’t matter whichever format pad it is, your device will charge on it.

So, the verdict so far is that the Galaxy S6 and S6 Edge still feel like a Samsung, but look very premium due to the metallic chassis. On the specs front they are a beast of a phone, which is always expected from a Samsung flagship device. So, from a glance the S6 and S6 Edge do seem capable of resurrecting the lost profits cause by the Galaxy S5. Both the devices will be available from April 10th first in 20 countries then the rest of the world to follow.

Specs of both devices: