Android ahead of RIM in US market 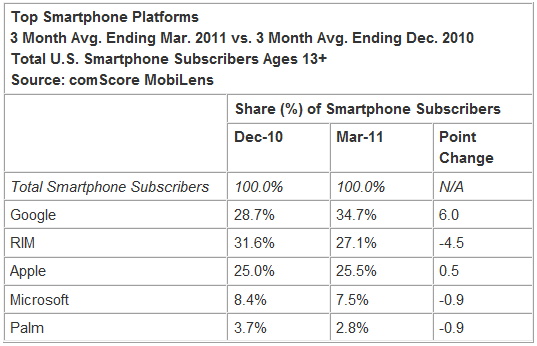 So the above presents a very rosy picture for android, as almost everyone is on a decline except android.The reasons of everyone share fall is only one, the share gain by android.It is said 2010 was a breakthrough year for android when it was able to won the interest of not only the  people all over the world but the developers and the enterprise sector as well.

As 2011 goes on, it is expected to see Android surpassing RIM, Apple, Microsoft and others as Google has gone a journey ahead with their business model which seems to be proving right for them.

We are already hearing the predictions from researchers and analysts that android would be the top smartphone OS in market share worldwide by 2015.But the way android is growing some believe that it can do this much faster.Regardless, they all think  it will eventually win  the phone wars. As you know, tablets are currently an entirely different story.

Beside android Apple is the only one to show growth(though it is minor).RIM is currently  second, Apple is third, Microsoft follows Apple, and Palm is still the last.

What are you expecting at Google IO developer conference?