The tablet world’s new contenders KINDLE have stirred up a massive storm in the market. The Kindle Fire one of its flag ship tablets have got a lot of positive reviews and according to an analytics c0mpany  it has given Samsung’s Galaxy Tab a run for its money. Closing in on it like a predator waiting to pounce on its prey. 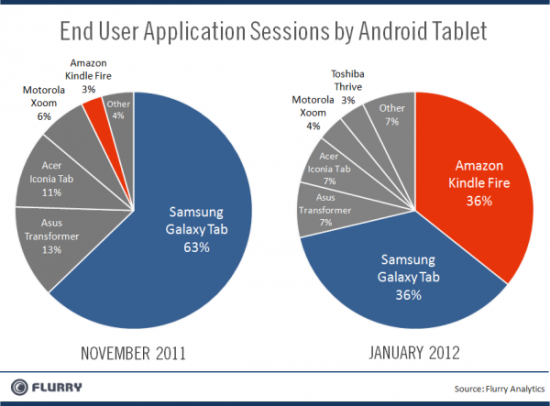 There’s a new sheriff in town according to Flurry, an analytics company tracking tens of thousands of Android applications. After crunching the numbers on Android tablet usage the firm found that the Amazon Kindle Fire has quickly closed the gap with the Samsung Galaxy Tab. In November, the Galaxy Tab (no specific model is named) accounted for 63 percent of the Android tablet market in terms of application sessions tracked by Flurry. The fledgling Kindle Fire only accounted for 3 percent  during its first month on the market. Fast forward to the new year and the Kindle Fire has exploded in popularity, joining the Galaxy Tab at the top of the heap with both devices holding a 36 percent share.

7-inch Froyo tablet to be released by BeBook in June

Huawei Smart Watch boasts to have more than 40+ Watch Faces