Samsung recently announced the launch of its very first Hybrid (touch and QWERTY) version of the Galaxy Series, the GT-B5330 also known as the Galaxy Chat. The device, as you might expect for a phone focuses on messaging and is the very first QWERTY device that runs on Android 4.0 ICS. It features a 3.0-inch QVGA display, 1200mAh battery, 4GB of internal storage (plus microSD expandability), and a 2MP camera. On the plus side, the phone does feature many of the user interface improvements found in the recently released Galaxy S3. As the name implies, Samsung is pushing their ChatON service with the Galaxy Chat, and the phone comes preloaded with the messaging software. 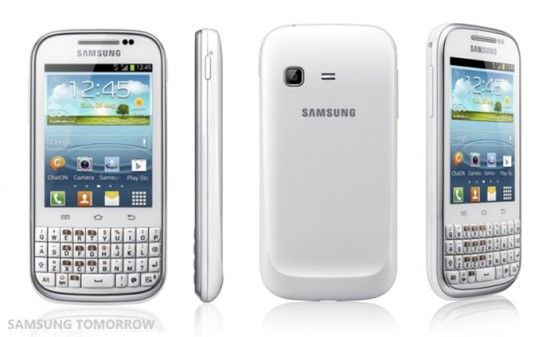 When it comes to software it has the Touch Wiz interface of Samsung on top of Android 4.0  and the ChatON communication server along with Quick Office editor and it also comes pre-installed with S Planner apps. The exact price of the handset is yet to be confirmed but Samsung have said that the handset will be in a competitive price range. Spain will be the first to get their hands on the device at the end of the month followed by other markets including Latin America and Asia.

While it may not be anything for lovers of high tech devices like the Samsung Galaxy S3 to get excited about, those who want a simple and modest equipped handset may want to consider it. 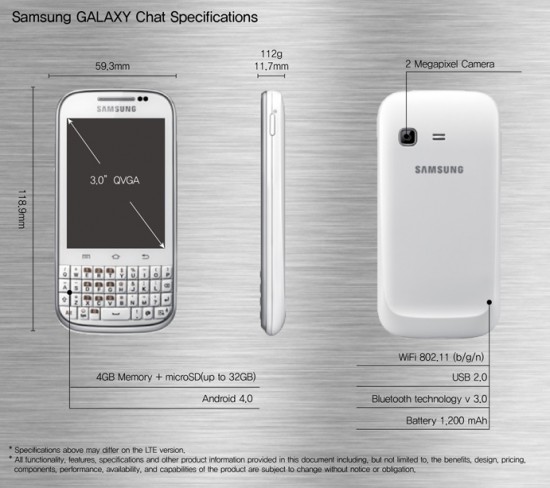 iPhone 4S vs the Galaxy S3 – Who will win the ultimate screen scratch DRAG race ?