When the Galaxy Note II first came into picture, the major focus mainly revolved around its gigantic 5.5″ Super AMOLED display and obviously a few other things including its impressive Quad-core 1.6 GHz Cortex-A9 processor along with a very powerful Mali-400MP GPU. Now besides all this jazz, there was one unique feature which even though came pre-installed with the device, it was never actually deemed ready for use till now (after getting updated). The Galaxy Note 2 has a great little feature called “multi-window”.

Multi-window actually allows you to use two different apps at the same time. Sounds interesting doesn’t it ? The whole multi-window functionality is quite similar to traditional desktop multi-tasking, except you get the experience on this awesome, gigantic phone. The screen is certainly big enough for such a feature, and it actually does work pretty well. We still aren’t sure whether or not this feature can be used with apps from the Play Store but we’re working to find out. 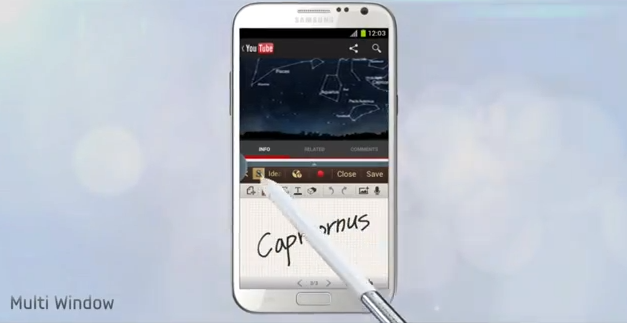 Updates for the unlocked versions of the Galaxy Note II have already started rolling out so if you are one of those lucky chaps in possession of this amazing device make sure you keep an eye on the notification bar as you never know when this little nifty update can pop up.

#YouTubeRewind showcases some of the best videos, memes and trends of 2016