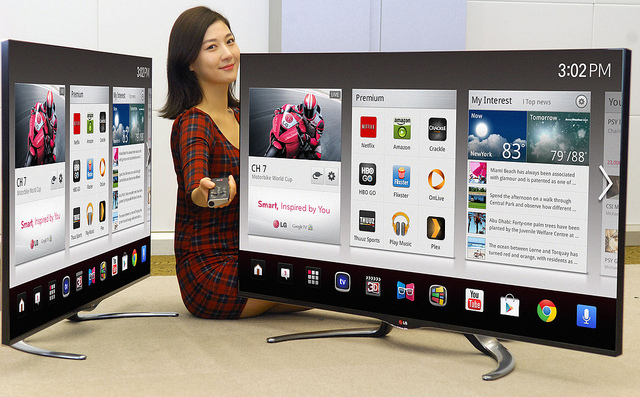 Google TV has been Google’s Achilles heel for quite some time now and has been struggling to keep pace with the other brands. We might be looking at a shift in things pretty soon though. Apparently LG have just recently announced their new range of 3D TV’s all having Google TV integrated within them. The displays are already looking great with new designs, a variety of different sizes and a sizable amount of other features.

According to LG, the TV’s would be available in 42, 47, 50, 55 and 60-inch sizes along with a few notable changes and improvements made over their predecessors which were released last year that include a sleeker design and  a smaller bezel to name a few. The devices are set to feature Google TV 3.0 which adds a variety of new interesting features like PrimeTime and Voice Search, OnLive compatibility and a few other features that are promised to come bundled along with LG’s new custom made UI. The LG Smart TV with Google TV offers superb connectivity options and can connect to a variety of devices wirelessly. With the latest YouTube app update for Android, smartphones and tablets can be automatically paired with Google TV over the same home network via Wi-Fi, making it easy to send videos from your device to your TV.

Gamers will be pleased to know that LG Google TV will offer the OnLive® app pre-installed, which transforms the TV into an incredible gaming platform without a console. The app makes hundreds of high quality video games available instantly from the cloud. Also offering CINEMA 3D TV functionality, the LG Google TV employs FPR technology to give movie buffs and gamers a great 3D effect without the distracting flicker.

Furthermore, Google have also promised to add their Google Now “Cards” service to Google TV through which users would be able to check content of TV programs, get up to date weather information and plenty of other amazing features. The cards are also stated to work as folders for Google TV apps. Sounds cool doesn’t it ? Well from the looks of things, we might not have to wait very long to get a first hand view of these though as LG have promised to unveil two models at CES 2013 where the Korean company have stated to display the GA7900 and the GA6400 respectively. News regarding price and availability have not been disclosed as yet but we’ll be closing in on further details once these devices get officially launched at the four day CES event starting Jan 8th, 2013.