Apple have always considered themselves to be innovators, being in the forefront for many a decade, especially with their iOS. They at WWDC 2013 today launched the very latest edition of their OS, iOS 7. The UI has been completely changed, so those who got tired of seeing the same old iOS look year after year. Then this is really good news, the new UI focuses on a beautiful Holo UI look, if you’re an Android user then this would sound oddly familiar to you. Wouldn’t it?

The new iOS 7 looks very similar to that of Android 4.0, which introduced the Holo UI in 2011. Currently Google’s OS is currently reigning supreme on version Android 4.2, Jelly Bean.

The lock screen has completed changed, so the “sliding to your right” to unlock the iPhone has been removed. Apple really are to sticking to “”keeping it simple”, with nothing but text on the lock screen. There is no confirmation yet if there will be any widgets on it. 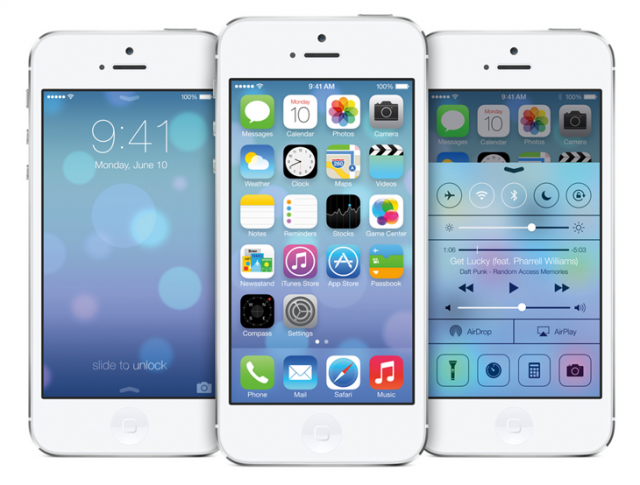 The homescreen layout is the same but the color pallet used on the homescreen is a bit similar to that of the Google Play store, so the new look has made it  quite vibrant and really nice to look at. The homescreen works well with the iPhones gyroscope because when you tilt the device you can almost see behind the icons. If you want this in your Android device then, there is an app on the Google Play Store called 3D Effect Live Wallpaper.  Apple still has not gone into the live wallpaper territory yet. Though, Android’s version of Holo has sharp edges to its design, while the new iOS has rounded edges. 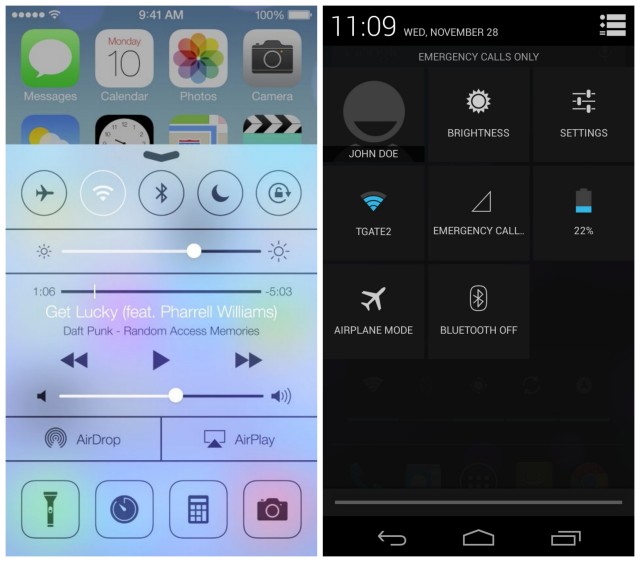 iOS 7 gets a taste of quick toggles, which mean that you get an option to turn on/off all the basic functions like Wifi, Airplane Mode, Bluetooth etc. This again is all too similar to the Quick Toggle found on Android 4.2. 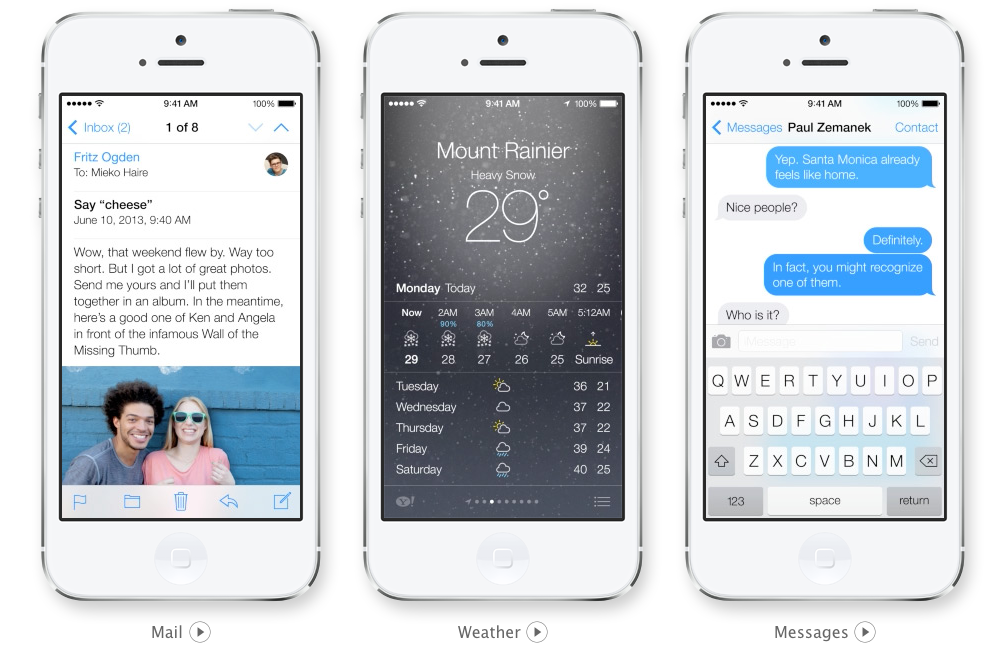 The weather app has received a complete overhaul; actually it’s the same Yahoo app available on the App Store and looks quite similar to that found in HTC’s Sense 5. Weather apps are usually integrated on all android devices, if you are using a Touch Wiz device, then the clock is integrated with the weather App. If you have a Sense 5 device then blink feed shows you the weather on your homescreen. Not only the homescreen, but it is also available on the lock screen. So, weather for an Android user is always available at a glance. Mail and message gave a new look too, with swipe to delete option added in messages. 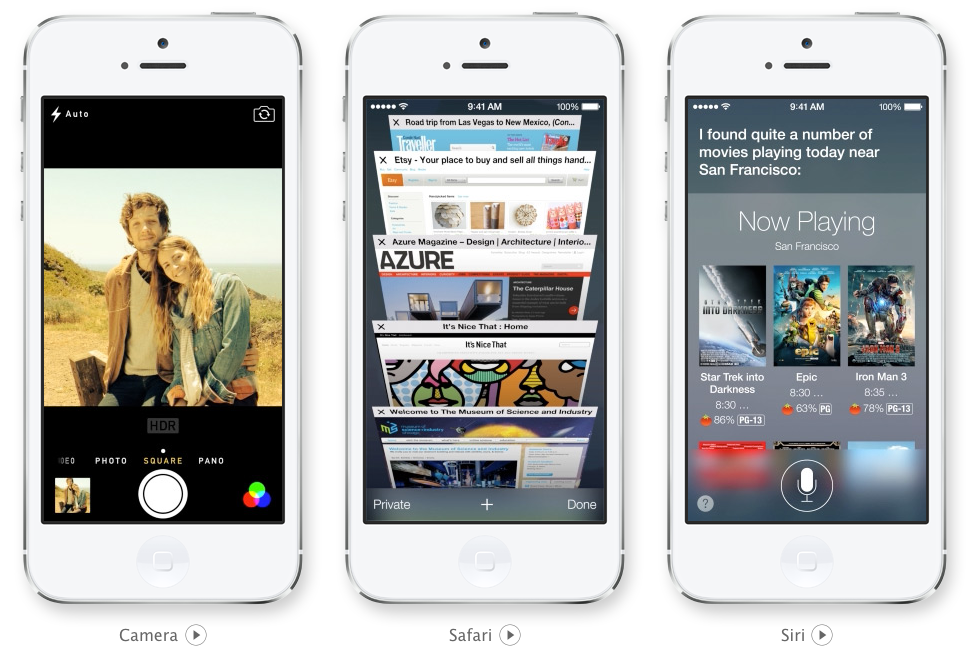 The Camera App found on the iOS has become quite clean, with a lot of transparencies and a couple of new features, which again if you are an Android user can get them all if you download Camera 360 from the Play Store. 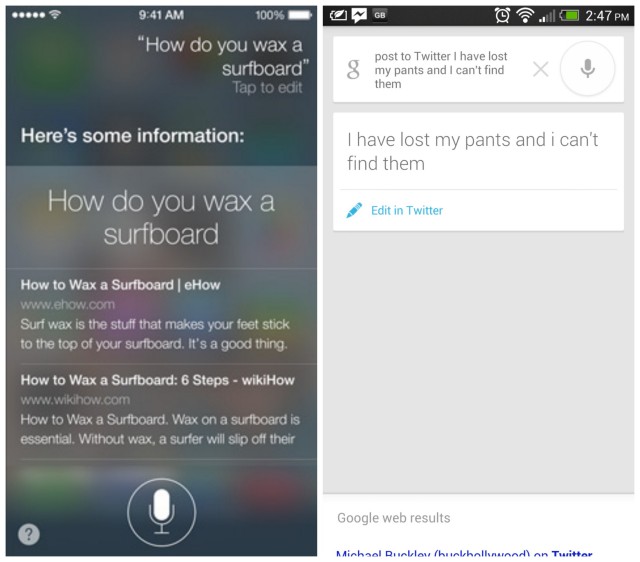 Siri too has been completely changed, with a glass like background so you can see the homescreen underneath as well. Siri also can be used to search directly via “Bing”. Yes not Google but Bing! Apple’s Siri though does have the option of becoming either male or female, and comes in a variety of languages as well.  Google Voice has now can be updated, without updating the whole OS, so it has the ability to get upgraded much quicker than Siri. 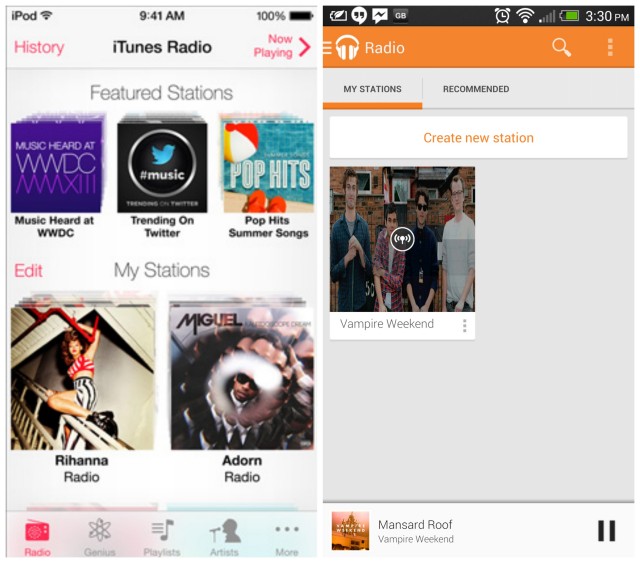 iOS 7 new iTunes Radio offers users to ability to listen to music stations and buy song on the go. The app is ad based, but if you are an iTunes Match member then you get the ad-free version. This app has been labeled a “Pandora Killer”, but only time will tell if that is the case. Google also updated Google Play Music with similar features, plus if you pay $8 a month you can stream music as much as you want. 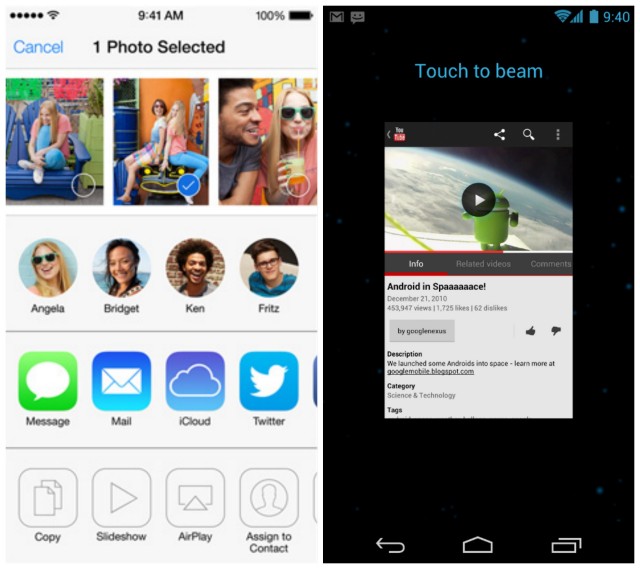 AirDrop is a new feature which comes bundled with the iOS 7; it basically lets users send/receive photos, videos and files via NFC.  Similar to Android Beam, you have to tap the devices to transfer the file, so if this feature is “New” for Apple, it has become a bit old for Android users, as we have using it, since Android 4 ICS. Android users though have the app “Bump” too, which not only lets you send pictures via NFC, but any file on your device. 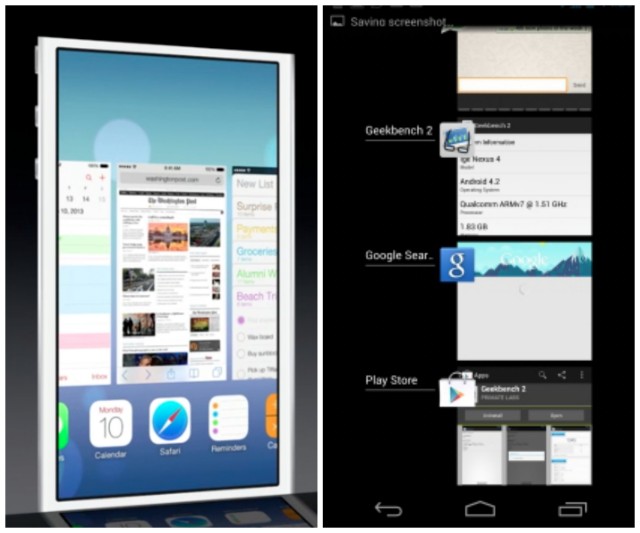 Apple, welcome to the world of multitasking! The new iOS 7 comes with multitasking features, which basically means you can keep apps open in the background while you switch between apps with ease. Android users have again been enjoying this feature since 2011, but better late than never for Apple users. 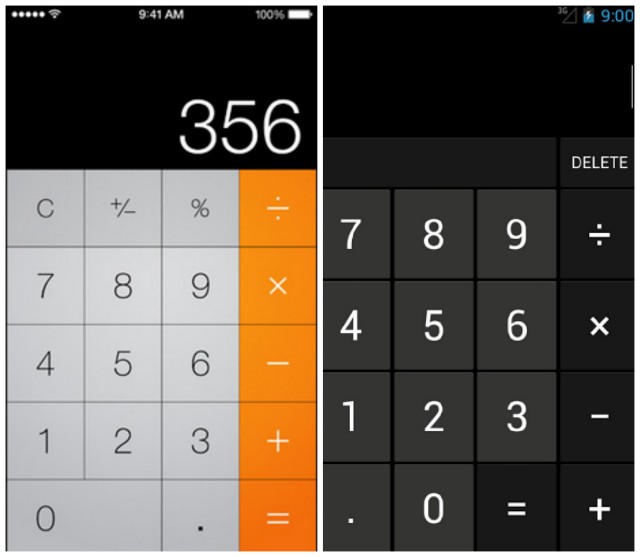 Though it is true, that you cannot do much with a calculator app, but it is actually quite amusing to see how similar the iOS 7 calculator app is with the one found on any Android device.

Though this article would not fair too well, with Apple enthusiasts, but you cannot run away from the truth, that Apple for the iOS has slipped a bit when it comes to actual “innovation”. This is quite commendable for Google and the Android App developers. So, when Google brings out the its new Android versions Key Lime Pie, it would only have to out do themselves.

Google holds its own Oscars – The Players Choice Awards 2013