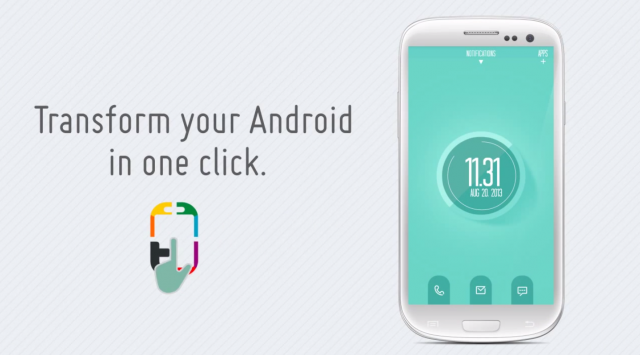 The core beauty of using an Android device is that you can customize/modify it according to your own needs and preferences using different launchers. In short, you basically get to avail a new user interface experience almost every day. Now the one hurdle that comes with using a launcher on your device is the fact that you have to manually do all the customizations yourself which at times might prove to be a wee bit time consuming. This is also one of the main reasons why people usually tend to refrain from using them and opt on using the same boring old UI instead. It seems that things are about to change now thanks to the guys at MyColorScreen (MCS) who have come up with a uniquely brilliant solution for all your customization problems.

The company which is known for developing some of the most amazing and unique themes for Android have recently unveiled their plans on an upcoming app called “Themer” which will prove to be a 1-click solution to all those manual customizations issues which people used to face initially and in most cases are still facing the same. At first, even applying a normal theme on an Android device used to be a hassle with people having to go through videos of long boring tutorials just to change the color scheme and icon pack on their devices.

With Themer, Android users will now be able to apply their favorite MCS themes directly by nothing more than a mere click of a button with the app doing everything else on its own….literally. The app is currently in its beta stage and would be made available soon (hopefully as a free download) on the Google Play Store. In the mean time you can sign up on their official page to gain a firsthand experience of what the upcoming app has to offer.  For some of you who have already been lucky enough to try out this nice looking app are free to share in their experiences with us. For the rest of you who have not tried it out as yet, we’ll be keeping you guys posted.

Android KitKat contest gets underway. Are you lucky enough to win ?